The Ring and the Flag (Shards of Light #1)

A Tale of the Lands of Hope 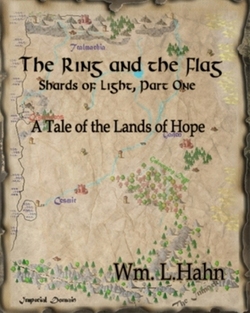 In 2002 ADR, the Empire of Argens is still reeling from the usurpation of its centuries-old throne by a landless adventurer. A ferocious dwarven warrior named Yula and his sorcerous human allies not only defeated the flower of elvish knighthood, but exposed the former dynasty as nothing less than demons in disguise. Now a young captain, ruined by his loyalty to the old regime, has one last chance to redeem his family name in the officer training corps being established by the hated new emperor. Captain Justin gets much more than he bargained for, however, as he is sent on a secret mission to the North Mark, hotbed of disloyalty even in the old days and now on a trip-wire for revolt. Given only days to assemble a company, march north and defuse the conspiracy, the new captain will be tested too often, too hard and far too soon. "The Ring and the Flag" is the first story in the Shards of Light saga set in the Lands of Hope, the creation of Wm. L. Hahn. More than twenty years in the making, the Lands hold tremendous adventure, a sense of history, and a strong theme of the difficult choices heroes must make when faced by the power of Despair. 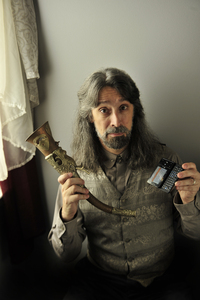 Will Hahn has been in love with heroic tales since age four, when his father read him the Lays of Ancient Rome and the Tales of King Arthur. He taught Ancient-Medieval History for years, but the line between this world and others has always been thin; the far reaches of fantasy, like the distant past, still bring him face to face with people like us, who have choices to make. Will didn't always make the right choices when he was young. Any stick or vaguely-sticklike object became a sword in his hands, to the great dismay of his five sisters. Everyone survived, in part by virtue of a rule forbidding him from handling umbrellas, ski poles, curtain rods and more. Will has written about the Lands of Hope since his college days (which by now are also part of ancient history). His first tales include "Three Minutes to Midnight" a slightly-dark sword and sorcery novelette, as well as “The Ring and the Flag” and "Fencing Reputation", the first stories in the ongoing Shards of Light series. The first novel-length tale of Hope, "The Plane of Dreams" was published in September 2012. You can find much more about the Lands of Hope at the links below, including a Compendium of information about the Lands and a Facebook page on the History of the Lands. Check out other online authors at Independent Bookworm, where you can also find The Maps of Hope, a free resource for readers about the Lands.