Safety Assured Leaving East of Medicetti (Forest at the Edge #5) 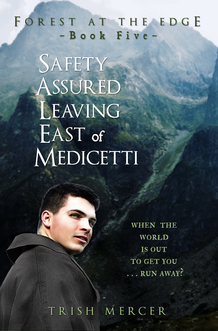 It’s been three weeks since Mahrree publicly denounced the Administrators about Terryp’s land being poisoned, and since Perrin resigned from the army instead of becoming its High General. The world's been shunning them ever since. But the Shins have been fine with that, busy with making their own plans to sneak away to Terryp’s land . . . Until one night when mysterious visitors in dark mottled clothing tell Mahrree and Perrin about a new land and an unknown civilization where they need to take their family, because Chairman Mal is planning to arrest the Shins and try them for sedition. The Shins and Briters have to trust these secretive people to help them escape before the Administrator of Loyalty arrives. But seventeen-year-old Peto, the last Shin thinking clearly anymore, is agreeing to go along only so that he can rescue his family from the rescue of Shem Zenos–the duplicitous spy–and his “Guarders.”

Book 5 in the "Forest at the Edge" series: Part fantasy, part adventure, part humor, part romance, part mystery all equates to a wholly entertaining and unique family saga. You've never read anything quite like this before. 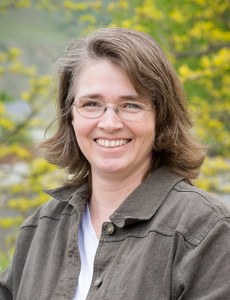 Trish Strebel Mercer has been teaching writing, or editing graduate papers, or revising web content, or changing diapers since the early 1990’s. She earned a BA in English from Brigham Young University and an MA in Composition Theory and Rhetoric from Utah State University. She and her husband David have nine children (and now adding grandchildren) and have raised them in Utah, Idaho, Maryland, Virginia, and South Carolina. Currently they live in the rural west and dream of the day they will be old enough to be campground managers in Yellowstone National Park.