Defrost (Voyage of the Volery #1) 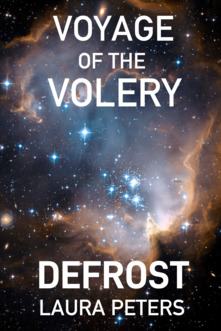 Those who planned humanity’s escape from a doomed Earth didn’t wait for crowdfunding or positive public opinion polls. Construction on the UESS Volery was well underway when stories about Apophis colliding with Earth began to move from pseudo-science blogs to the front pages of the Associated Press. That was lucky. There wouldn’t have been time, otherwise.

The ship was assembled in space, secretly, on the far side of the moon, and they finished her ahead of schedule. That was lucky, too. The world was running out of time.

On the very day video imagery of the Remote Manipulator System's robotic arm breaking a bottle of Mumm Grand Cordon Stellar Champagne against the nanocarbite steel of her saucer section flashed across the Net on Earth, Apophis was sighted in the night sky.

Soon afterward people could see Apophis with their naked eyes, but the Volery remained hidden. Even though the moon shrouded her in secrecy, she was talked about all over the Earth.

People knew she was huge. Photographs of her sections, under construction, were leaked to the Net. People knew she was assembled in space. There were witnesses when one section or another launched past the Earth's atmosphere. Finally, people knew she was the most expensive craft humanity ever built. She took a multinational effort, funded by various governments and a few prominent billionaires.

George A.C. Voler spent his entire fortune on her. At first, his family and friends mocked him, but he figured he got the last laugh. His money bought him a first-class berth and the honor of having the ship named for him. Her name was officially recorded as Volery, but George had Voler’s Folly emblazoned on her side in 24-carat gold leaf. The lettering was big enough, he ensured it, to see it clearly from observatories on earth.

When the world gathered to watch his ship swing out from behind the moon and shoot toward space, George made sure a few people he knew were invited to sit in front row seats at Atacama.

Anna Louise Smith was aboard that day. She escaped from Earth in cabin 347 on Deck 5. That was lucky, too.

Somehow Anna had been accepted as a deckhand second class in the Volery’s Civilian Conservation Corps even though she hadn’t officially qualified. (Her test scores were a single point too low.) Anna suspected her boyfriend engineered a clerical error or pulled in a favor to get her name on the roster, and she knew better than to ask too many questions.

When it was time to leave Earth, Anna rode the shuttle transport to the Volery, and then she sank obediently into the deep freeze.

It was going to be a long trip, and luck had run out. 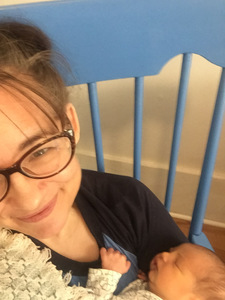 Laura Peters is a mother and grandmother. She's been dreaming up stories since before she could walk, and she compiled her stories into little books before her scribbles formed words in readable English. When Laura was very small, her mother often gathered up the loose pages of her "books" and bound them on a sewing machine. This is a tradition that Laura continued into adult life, and her own books, as well as many creations of her children, have been stitched together in this basic at home publishing house. Laura holds a BA in English from the University of Maryland. She is certified in TEFL/TESOL. She taught English as a second language for many years. Now, Laura is a full-time caregiver for her aging mother, a part-time farmer, and a writer any time she has an extra second.