Armand Ptolemy and the Golden Aleph 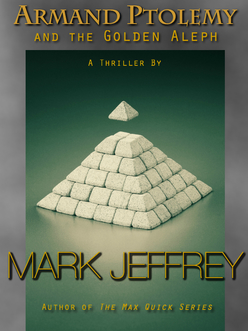 Podcast Audiobook
12 Episodes
266 Minutes Total
Podcast
This legacy Podiobooks.com title is only available as a serialized audibook in podcast form.

This is the world of ARMAND PTOLEMY, a new action-adventure hero. Facing an enemy armed with the Golden Aleph – a mystical device that allows its wielder to see holographically into every point in time and space, Ptolemy must use every trick of his Oxford-educated mind and circus-trained body to succeed.

But how do you fight an enemy that knows your every move … even before you do?

When Armand Ptolemy is called to investigate strange tremors plaguing an old wing of the New York public library, he finds himself enmeshed in a series of events that began in 1912. Yet Ptolemy himself is rumored to be from the past himself – and the world's Elite lust after the secret of how he seemingly jumped forward over one hundred years in time. Most keenly interested in this secret is Octavio Veerspike, head of the Veerspike banking dynasty.

When the Commission – a secret society of the world's most powerful people – suddenly call a conclave in the tropics, Ptolemy has to figure out what they're up to, and fast.

But the Elites have other ideas. Putting into a motion the capstone of a hundred-years old plan, the Commission wants Ptolemy out of the way. And with the Golden Aleph giving them very potent powers of prediction, they just may succeed …

Author Mark Jeffrey (@markjeffrey on Twitter) is perhaps best known for his best-selling young adult novel MAX QUICK: THE POCKET AND THE PENDANT (HarperCollins, 2011). First podcast as a podiobook, it was picked up by HarperCollins and re-published in hardcover in May, 2011. More information can be found at maxquickseries.com

MAX QUICK: THE TWO TRAVELERS is currently available as a podiobook. Mark Jeffrey is currently working on MAX QUICK: THE BANE OF THE BONDSMAN as well as ARMAND PTOLEMY AND THE GEOMANCER. More information on Armand Ptolemy can be found at armandptolemy.com

Praise for MAX QUICK: “A wildly imaginative romp through the vagaries of time, Max Quick leads the reader on a high–speed tour of ancient myths, alien kingdoms and some books you can really throw yourself into. Terrific adventure at breakneck speed.” (Richard Newsome, author of The Billionaire’s Curse )

“An imaginative addition to the middle-grade speculative adventure canon.” (Bulletin of the Center for Children’s Books )

“Max Quick has the answers to life’s biggest questions. The world stands still the moment you enter this book. It’s a fabulous, fleet-footed adventure story that goes by in a whoosh.” (Kristin Miller, New York Times bestselling author of The Eternal Ones and the Kiki Strike series )

“A fresh, fun and fascinating idea deftly brought to life. With all its deeply–felt adventure, Max Quick should quickly captivate young readers.” (James Jennewein and Tom S. Parker, authors of the RuneWarriors Trilogy )

“This fast-paced adventure…will keep readers turning the pages. The incorporation of figures from Sumerian mythology adds an interesting element that may appeal to fans of Rick Riordan’s “Percy Jackson” series.” (School Library Journal )

“Jeffrey’s descriptions of how time has stopped will stop readers in their own tracks. Plenty of action-adventure appeal.” (Booklist )

Mark has been named on of ‘50 to Watch’ by Variety Magazine, selected as one of the “Digital Coast 50′ by the Silicon Alley Reporter, and one of the “Heroes of Multimedia” by Entertainment Weekly and presented as a featured speaker at the first Harvard University Conference on the Internet and Society in 1996.

Mark holds a B.S. Computer Science from the University of New Hampshire.

Listen to Armand Ptolemy and the Golden Aleph

We will send Armand Ptolemy and the Golden Aleph to your Kindle at .

Armand Ptolemy and the Golden Aleph has been sent successfully to your Kindle!