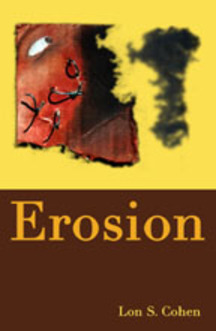 Canyon Park is bowed down under a relentless torrent of rain. The fields are flooded, the bridges crumble and the increasingly isolated town is host to a serial killer with a grudge against the wealthy Lollo family. Slipping between a small cast of characters; the killer, the tortured policeman hiding a dark secret, the returning son, the inquisitive librarian, the boy caught between cultures…. each of these marred, struggling humans a part of the threadbare fabric of the town. Throughout the story, secrets and motivations are slowly revealed, people continue to die, and it continues to rain. - Emily from POD People

The story is about a Native American, driven to madness by his experience growing up in the small upstate New York town of Canyon Park being discriminated, molested and ostracized. In his mind, various characters of his tribe's mythology and American popular culture vie for his soul. He terrorizes the residents of Canyon Park, murdering those he judges guilty, to punish them for their crimes against him and his ancestors. Strangely, since the killing spree began, there has been a deluge of constant rain adding to the dismal mood and hampering efforts to stop him while the resident also battle nature's fury. Under these conditions, various characters gather from places as close as the local library, to as far away as New York City, to absolve their sins and stop their beloved town from being eroded away.

All the characters are eventually stripped bare in this trying time and face their naked souls, their dark inner parts that they are afraid to see and their true selves. America's national guilt over the destruction of the Native American culture is weaved through the motivation of the characters as they struggle with the consequences of acts they committed in the past or the acts of their kin.

The Indian Boarding Schools and the Mythology of Iroquois Creation Myth were thoroughly researched and are based on fact though the setting and characters are all fictional.

Thanks Tom Cote for his version of Amazing Grace in my last chapter.

We will send Erosion to your Kindle at .

Erosion has been sent successfully to your Kindle!