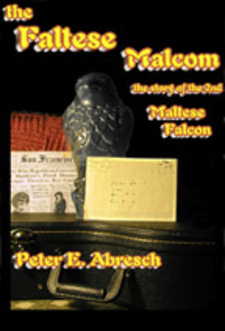 The Faltese Malcom was recorded using a number of actors in stereo, with left and right voices, where you'll find adventure, love, laughter, a hard-boiled mystery, and walk on the fantasy side with time travel.

No one believed Joshua Punch.

"You're not going to believe this." He gazed into her blue eyes. "While I was visiting Buckys's house–"

‟While he's away on vacation.‟

"While he's away–you gonna listen to this?‟

"Somebody in there schlunked me on the head. I woke up dangling out on the ledge of the thirteenth floor of a hotel. In San Francisco. I got schlunked on the head again and I ended up back in Buckeys's house. I'm mentally being swapped back and forth with some guy in San Francisco."

He stared into her big blues and one eyebrow rose.

"There's something else, isn't there? Something about San Francisco?"

"It's in the nineteen twenties."

But believe him or not, when he landed in San Francisco he found himself in the body in of a private eye named S. Paid, who everyone called Spaid. And Spaid was smack in the middle of a war between a mob boss and a beautiful Chinese tong queen who had designs on his body. Which was okay with Josh, except when she threatened to cut off the good parts of his body. Who would feel the pain, Spaid or good old Joshua Punch? Also, Spaid's partner was killed and a couple of cops wanted to put him in a cell and throw away the key–clichés, everyone there spoke in clichés. Oh yes, and a woman wanted him to find something called the Faltese Malcom. Except…

"The Faltese Malcom?" The fat man's big belly shook as he tried to contain his mirth. "I hardly think so, Mr. Spaid. Another one of Miss O'Shaughnessy's little fictions I fear. What we are really looking for is… the Maltese Falcon."

Meanwhile, in twenty-first century Washington, the falcon everyone wanted–the FBI, an oil company, and a couple of mobsters–was a guided missile stolen from a navy base. And everyone thought Joshua Punch had it. And if he didn't produce it, everyone was threatening to cut off the good parts of his body. And Josh had no doubt who would feel that pain.

But the O'Shaughnessy dame had it right all along.

In the end only one thing really made a difference.

Listen to The Faltese Malcom

We will send The Faltese Malcom to your Kindle at .

The Faltese Malcom has been sent successfully to your Kindle!