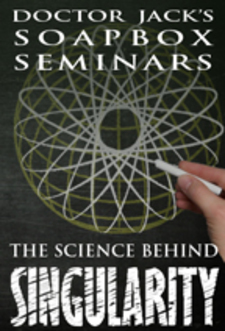 What if the cataclysmic Tunguska explosion of 1908 was caused, not by a meteor or a comet, but by a microscopic black hole?

… Well, like as not, you already know that story – the one told by Bill DeSmedt in his award-winning novel/podcast Singularity. What you may not know, though, is the story behind the story: the science behind Singularity.

Surprisingly (or maybe not), you can learn a lot about primordial black holes and the Tunguska Event and black hole radiation and the Big Bang on the pages of Singularity. And you don't have to take our word for it: some world-class physicists think so too:

"Bill got the vast majority of the physics right, which is highly unusual – especially in a book that is such a good read." – Kip Thorne, Feynman Professor of Theoretical Physics, California Institute of Technology and author of Black Holes and Time Warps: Einstein's Outrageous Legacy

"Singularity is an uncommonly good science thriller, quite free of the poetic license some writers take with the laws of nature in order to put together the yarn." – Jacob D. Bekenstein, Professor of Theoretical Physics, Hebrew University, Jerusalem and discoverer of black-hole entropy

"As a specialist in black hole astrophysics, I would have to say that this is one of the most creative uses of primordial black-hole theory in science fiction." – Scott A. Hughes, Professor of Theoretical Astrophysics, Massachusetts Institute of Technology

Now, for the first time, the real-life counterpart of Singularity's resident cosmologist, Doctor Jack Adler, steps up to explain what it is all these scientists are raving about, in his "Soapbox Seminars" – an informal look at the hard-core science behind the novel.

PS: Doctor Jack's got about fifteen or so of these seminars planned out so far, but that's subject to change – and you could change it. If you've got a question about the science behind Singularity, send it to Jack at doctorjack at soapboxseminars.com. Jack will incorporate some of your questions into upcoming Seminars, and the all-time best question will win a hardcover copy of Singularity, signed by the author, Bill DeSmedt.

We will send Doctor Jack’s Soapbox Seminars to your Kindle at .

Doctor Jack’s Soapbox Seminars has been sent successfully to your Kindle!