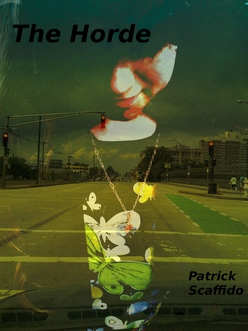 The Horde, a mysterious force that brings nightmares to life, devours everything in its path.

Bridan, a lone traveler, seeks the key to the Horde's destruction at the expense of all else- bystanders, worlds, and broken lives be damned.

Terry is caught between them, dreaming their battles across the blasted wastes of Farrakan from the safety of his dull nine to five life and the arms of his loving girlfriend.

None of this is true.

Terry glimpsed the hideous intelligence hiding behind the struggle and it has driven him mad.

Something watches, hungers, and manipulates events keeping the Horde moving ever closer to the center of creation, leaving only empty husks in its wake.

And as the Horde follows without rest, Terry knows that their next destination is Earth.

The Horde is a genre bending novel incorporating elements of Science Fiction, Epics, Dark Urban Fantasy, Horror, and Surrealism performed in the style of acoustic deathfolk and released weekly as short albums. You've never heard anything quite like it.

Listen to Storyteller Chronicles: The Horde

We will send Storyteller Chronicles: The Horde to your Kindle at .

Storyteller Chronicles: The Horde has been sent successfully to your Kindle!