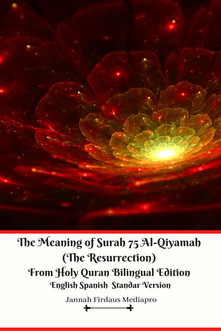 The Meaning of Surah 75 Al-Qiyamah (The Resurrection) From the Holy Quran Bilingual Edition In English and Spanish Languange Standar Version.

The blessed Chapter, revealed in Mecca, has forty Verses. The designation of the Chapter, denoting Resurrection, derives from the opening Verse. The Chapter, as reflected in its title, mainly treats of the Day of Resurrection. It opens with an enumeration of the harsh and frightening incidents to occur at the end of the world and proceeds to make mention of the happy and sad appearances of the good and evil doers.

Further, the blessed Chapter deals with the states of mankind in the throes of death, the creation of man from a drop of semen as a token of Divine Omnipotence in recreating him. It is noteworthy that four Verses in the middle of the Chapter treat of the manner of Revelation and recitation of the Holy Qur’an. According to the traditions, one who perseveres in the recitation of the blessed Chapter and acts upon it shall be able to happily and smilingly cross the Bridge Spanning Hellfire (sirat).